András Dés graduated from the Jazz Faculty of the Ferenc Liszt Music Academy in 2005. As a member of numerous popular Hungarian jazz bands, including e.g. the Elemér Balázs Group, Kaltenecker Trio, László Dés Septet, the Winand Quartet, Zoltán Lantos’ Mirrorworld or the Miklós Lukács Quintet, he has been touring all around Europe and has played at many i 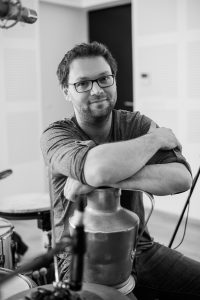 mportant and world famous venues such as Carnegie Hall, Covent Garden, the Amsterdam Concertgebouw, the Damascus Opera House, the Jerusalem Theatre or the Shanghai World Expo.

He has contributed to more than 70 albums as a percussionist and has also participated in several film and theatre scores as a composer. His first own album, Unqiuet Stillness was released in 2009 and received great critical acclaim.

Besides jazz, Dés is also familiar with other genres of music. He was a member of one of Hungary’s most successful pop groups: Jazz+Az, played with Hungarian folk singers Bea Palya, Ági Szalóki and the band Mitsoura (electronic world music).

Over the past years, Dés has developed his own percussion set: with his right hand he plays like a drummer and with his left hand like a percussionist. He also plays several hand percussion instruments like the Hungarian kanna (water can), some frame drums from all around the world and also some instruments from the Latin American tradition.

At the present time, Dés is part of the jazz trio “1705”, as well as of Vera Jónás Experiment (a young singer-songwriter’s band), and Miklós Both Folkside. He also participates in different casual projects such as great symphonic concerts mixing jazz and contemporary music, and frequently tours with great Hungarian writers playing reflections on their writings.

Dés received the Artisjus Award as a performing artist in 2010 and the readers of the online jazz site “JazzMa” elected him for Percussionist Of The Year “2013”. He became an endorser of Bosphorus Cymbals in 2014.

One Response to Biography